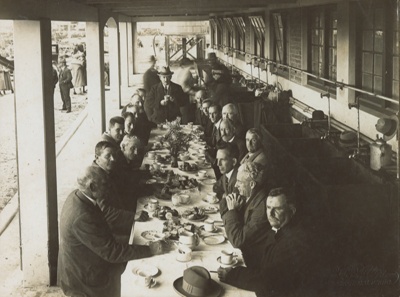 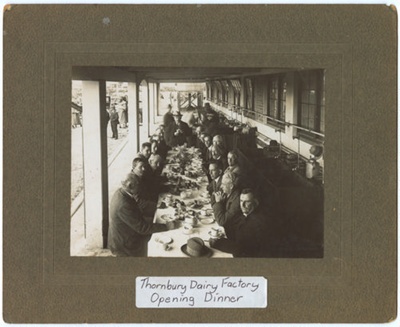 This is a photograph of the 1923 opening function for the new (second) Thornbury Dairy Factory which was attended by Prime Minister William Massey.

Murray & Co of Underwood, who later became the Highland Milk Condensery, financed the building of the first Thornbury Dairy Factory in 1903. Located opposite the town hall, the factory was to be a pasteurizing and condensing plant.

The Co-op factory began trading in 1904, with 30 local shareholders. During peak season, a combination of both wet and dry suppliers, provided about 400 gallons of milk for the factory per day. The reduced milk produced from this supply was carted to the Railway Station where it was taken to the Wallacetown siding at Lorneville.

Not long after trading began, the Co-op severed ties with Murray & Co and began producing their own cheese.

The old factory had been built on and extended so much since its construction in 1903, that by 1923 a new factory was really needed.

Built next to the Aparima River Bridge, materials for the structure were supplied by Johnston's Engineering, Invercargill and A & T Burt, Dunedin.

The new build coincided with the 1923 Monowai Scheme which delivered electricity to much of rural Southland Prior to this, dairy factories had to be built close to rivers as they were powered by lignite-fire steam boilers. There were three lignite pits were located between Thornbury and Fairfax.

The 1923 buildings remains and is now the Thornbury Slink Skins Tannery.