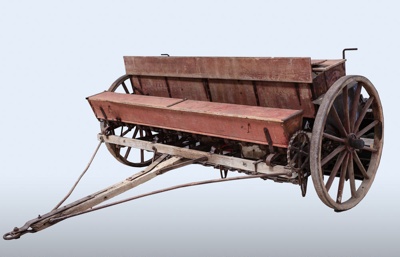 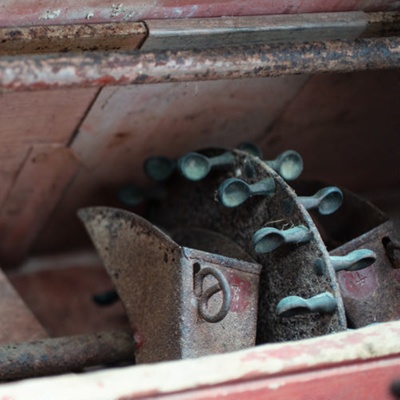 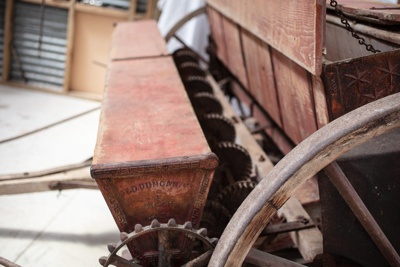 This type of seed drill is called a Spoon Feed Seed Drill because thousands of little spoons picked up individual seeds and planted them about an inch apart. Though each spoon could only plant one seed at a time, because of the number of spoons and the speed of the drill, it was relatively quick. Additionally, it was quite wide for its time, which also contributed to the speed of planting.

This type of Spoon Feed Drill was only manufactured by P & D Duncan, who designed it to be capable of sewing various crops. By creating changeable varying sized spoons, farmers could plant swedes, chow or grain, and while originally designed to be pulled by horses, with the development of tractors, it was towed by modern machinery as well.

Donor Helen Barrie’s grandfather, Wilfred John Winchester, purchased this Spoon Feed Seed Drill from P & D Duncan for the purpose of cropping on a large block of land at Irwell, near Leeston in Canterbury. Helen’s father inherited the Drill and she remembers her father, Leicester Louis Winchester, using the drill on his farm at Leeston.

After Helen married, the drill was offered to Helen's husband Brian. Brian accepted the offer and it was railed south, where it was used to sow many hectares of grain at Browns (east of Winton).

Having been used up until the 1990s, and well cared for, the drill is still functional and is very rare.