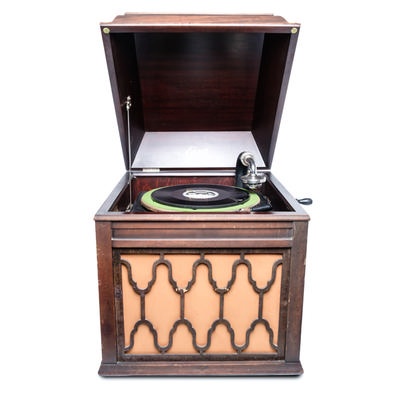 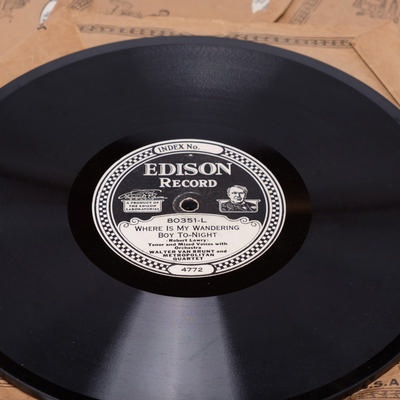 The Edison Diamond Disc Record is a type of phonograph record marketed by Thomas A. Edison, Inc. on their Edison Record label from 1912 to 1929. They were named Diamond Discs because the matching Edison Disc Phonograph was fitted with a permanent conical diamond stylus for playing them. Diamond Discs were incompatible with lateral-groove disc record players, e.g. the Victor Victrola, the disposable steel needles of which would damage them while extracting hardly any sound. Uniquely, they are just under ​1⁄4 in (6.0 mm; 0.235 in) thick.


Early Diamond Disc records, showing the thickness of each record and number stamped into side.
Edison had previously made only phonograph cylinders but decided to add a disc format to the product line because of the increasingly dominant market share of the shellac disc records (later called 78s because of their typical rotational speed in revolutions per minute) made by competitors such as the Victor Talking Machine Company. Victor and most other makers recorded and played sound by a lateral or side-to-side motion of the stylus in the record groove, while in the Edison system the motion was vertical or up-and-down, known as vertical recording, as used for cylinder records. An Edison Disc Phonograph is distinguished by the diaphragm of the reproducer being parallel to the surface of the record. The diaphragm of a reproducer used for playing lateral records is at a right angle to the surface.

In the late summer and early fall of 1929 Edison also briefly produced a high-quality series of thin electrically recorded lateral-cut "Needle Type" disc records for use on standard record players.