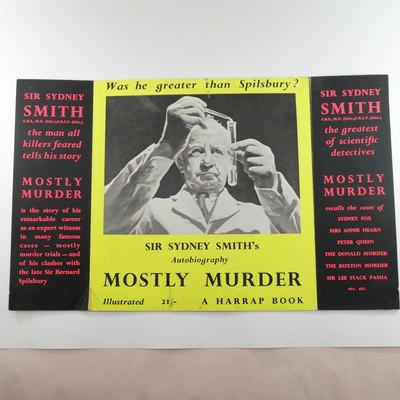 Smith was born at Roxburgh, Otago, in New Zealand the son of Mary Elizabeth Wilkinson and James Jackson Smith.

He was educated at Roxburgh public school, and Victoria College, Wellington. He later won a Vans Dunlop scholarship to study botany and zoology at the University of Edinburgh. He transferred to medicine and graduated with an MB ChB in 1912, with first-class honours, and then undertook a research scholarship, receiving a Diploma in Public Health (DPH) in 1913.

Following a short period in general practice, Smith became an assistant in at the University of Edinburgh department of forensic medicine at the suggestion of Professor Henry Harvey Littlejohn. He obtained his doctorate (MD) in 1914 with a gold medal, and also won the Alison Prize.

Smith returned to New Zealand in 1914 and took up a post as Medical Officer of Health for Otago at Dunedin. During World War I, Smith served as a major in the New Zealand Army Corps. In 1917, Smith took up a post as medico-legal advisor to the Government of Egypt and senior lecturer in forensic medicine at the School of Medicine in Cairo. Smith went on to establish himself as an authority in the field of ballistics and firearms in forensic medicine, publishing the first edition of Textbook of Forensic Medicine in 1925.

In 1928, Smith was appointed to the Regius Chair of forensic medicine at the University of Edinburgh. In 1929 he was elected a Fellow of the Royal Society of Edinburgh. His proposers were Sir Edmund Taylor Whittaker, Ralph Allan Sampson, Thomas James Jehu and James Ritchie.

In 1931 he became Dean of the Faculty of Medicine, a post he held until 1953 (succeeded by Professor Thomas J Mackie). During his period as Dean, in response to Polish medical students seeking refuge in Scotland, he founded the Polish Medical School of Edinburgh in 1941. He was awarded the Order of Polonia Restituta (OPR) by the Polish government after the war. The school was disbanded in 1949.

Smith was Rector of the University of Edinburgh from 1954 to 1957. He published an autobiography, Mostly Murder, in 1959.

Advertising board would have made to promote the book released in 1959.

{too much info to record here]

Image of Sydney Smith in his white coat and filling a test tube. Promoting his book 'Mostly Murder'