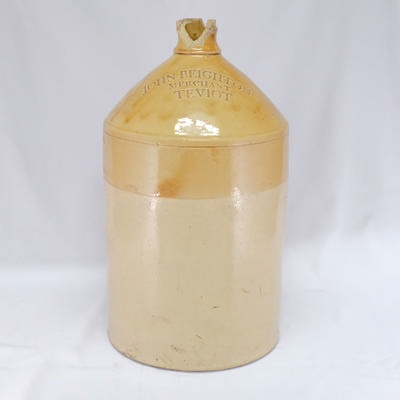 Very heavy stone jar with a broken neck donated to the museum by Miss I Henderson of Dunedin, New Zealand. It is not clear what the use of this particular vessel was but it is stamped with a prominent name in the local community of Teviot 'John Beighton'.

Doulton & Co. was first and foremost a manufacturer of industrial ceramics, including water filters, drainage pipes and sanitary fittings. In the early 1860s, however, the company began the manufacture of domestic and ornamental salt glazed stoneware that became known as 'Doulton Ware'. The nearby Lambeth School of Art became associated with the Doulton business from about the same time and Henry Doulton joined the Board of the School in 1863.

Doulton & Co.'s decorative stoneware produced in association with the School of Art had enormous success at International Exhibitions in the 1860s and 1870s, culminating in acclaim at the Philadelphia Exhibition in 1886 (and also at Chicago in 1893). Public interest, and production, peaked in the late 1890s when about 370 artists were employed at Lambeth making the salt-glazed ornamental stoneware.

With the death of Queen Victoria in 1901 and changing social tastes, the demand for the intricately ornamented stoneware declined so that by 1914 less than 100 artists were still employed. Following the end of the First World War, Lambeth produced stoneware reflecting more contemporary tastes, but by 1920 artist numbers had declined to only 30 – although small quantities continued to be made up to, and throughout (for export only), the Second World War.

Production continued on a small scale from the end of the war, and in 1952 the artist and potter Agnete Hoy joined Doulton, designing both individual pieces and limited edition works. She combined her unique style with the traditional Lambeth decorating techniques for a last flowering of the Lambeth stoneware tradition. Hoy’s design studio and the Lambeth works closed in 1956. Lambeth remained the headquarters of Doulton & Co. Ltd until 1971 and the buildings were demolished in 1976.

The Lambeth stoneware is exceptionally diverse and highly collectible and there are many specialist texts devoted to the story of Lambeth and its potter-artists.

In 1974, Doulton introduced 'Lambeth Stoneware' as a casual tableware brand in an oven and freezer proof stoneware body.