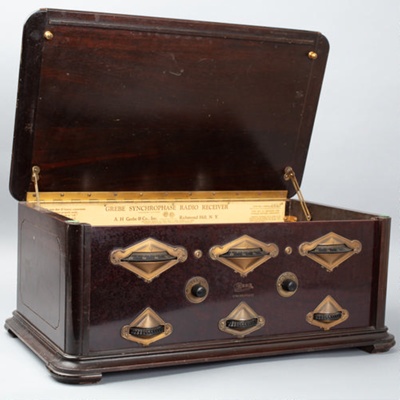 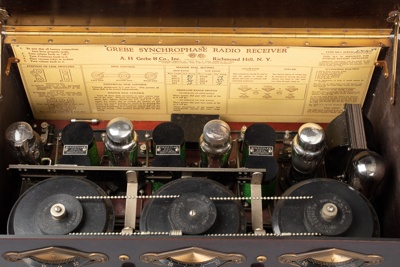 This Grebe Synchophase is an American TRF 6 valve receiver. Introduced between 1925 and 1927, it features mechanically coupled tuning capacitors linked via clutches to provide a degree of single knob control. This model was judged by many to be the most handsome of the mid-1920s TRF receivers.

The Synchrophase is a Neutrodyne circut. This became an issue for Grebe because Neutrodyne circuits were owned by the Independent Radio Manufacturers (IRM) who had paid Louis Hazeltine to design it exclusively for them. Grebe was not an IRM member and they were building a Neutrodyne,. Though a law suit was inevitable, Grebe’s production of Neutrodyne was never stopped. Synchrophase production reached 150,000 radios before the court even heard the case in June, 1927 and by that time, the Synchrophase was already obsolete. While Grebe lost the case, they were able to obtain a Neutrodyne license anyway.

Printed onto the centre face of the radio: 'GREBE SYNCHROPHASE'.