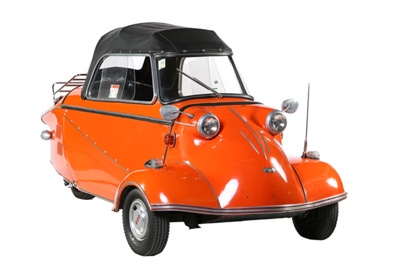 Messerschmitt was not allowed to manufacture aircraft after the Second World War and in 1952 was approached by aircraft engineer, Fritz Fend, with the idea of manufacturing small motor vehicles. The first of Fend’s designs to be produced was the KR175 Kabinroller, or ‘Cabin Scooter’ and although it bore the Messerschmitt name and insignia, a separate company, Regensburger Stahl- und Metallbau GmbH, was established to manufacture and market it.

In 1955, the KR175 was upgraded as the KR200 with the same basic, tandem-seat frame, an improved hood design, new rear suspension and engine mounts, hydraulic shock absorbers on all three wheels and larger, 4.00x8 tyres. It was powered by a 191cc Fitchel & Sachs single-cylinder, two-stroke engine coupled to a four-speed-and-reverse, sequential, unsynchronised gearbox. Maximum power was 9.9hp (7.4kW) and top speed was around 90kph (56mph). To advertise its reliability, one was prepared with a modified engine to attempt the 24 hour speed record for three-wheeled vehicles of less than 250cc. At the Hockenheimring on 29th-30th August, 1955, it broke 22 international speed records including the 24 hour speed record, which it set at 103kph (64mph).

In 1956, Messerschmitt was able to return to aircraft manufacture and sold the Regenburg works to Fend, who formed a new company with brake and hub supplier, Valentin Knott, to continue producing the KR200 and Fend’s other vehicle designs. In 1957, the Kabrio version of the KR200 was introduced featuring a cloth convertible top and fixed side window frames. With Germany’s economy recovering and the demand for inexpensive transportation reducing, production of the KR200 declined in 1962 and ended in 1964. It is estimated that approximately 40,000 were produced.