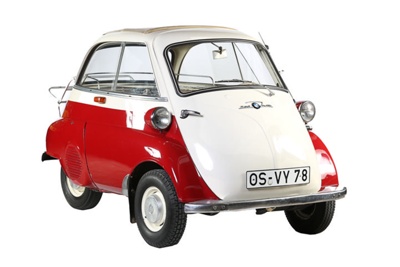 After the Second World War, there was a demand for inexpensive transportation in Europe and particularly in Germany. In 1955, BMW secured a licence to manufacture the Italian Iso company’s Isetta (Little Iso) as a BMW and with BMW’s single-cylinder, four-stroke engines rather than Iso’s 236cc two-stroke. The engine used was based on that of the R25 motorcycle with an electric starter added and was available in either 247cc or 298cc versions. Isettas were also available with either one or two rear wheels, the former making it eligible for registration as a motorcycle and side car combination in the UK, for example, to which BMW exported early examples. However, Isetta of Great Britain also obtained a manufacturing licence from Iso and UK-manufactured examples that did not carry the BMW badge. Isettas were also manufactured under licence in Belgium, Brazil, France and Spain, and more than 160,000 were sold between 1953 and 1963.

The front-mounted door had the steering wheel attached in such a way that it could be articulated out of the way for passenger ingress and egress. With motive power to the rear wheel(s) provided by a small, single-cylinder engine and a four-speed gearbox mounted behind the two-passenger seat, the Isetta deservedly had a reputation for being noisy and vibratory with rather modest performance. Its top speed was around 85kph (53mph).