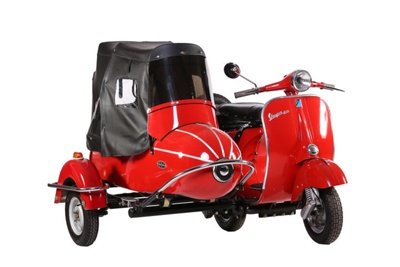 Piaggio, which manufactured aircraft prior to and during the Second World War, decided to leave that industry after the war and produce affordable transport as Italy began the process of rebuilding. In 1944, two of the company's engineers designed a motorcycle with bodywork enclosing the drivetrain and providing a tall splash guard at the front. Enrico Piaggio, the son of the company's founder, Rinaldo Piaggio, did not like the design and contracted Corrandino D'Ascanio to produce another. D'Ascanio's design had the single-cylinder, two-stroke engine mounted beside the rear wheel so that the wheel was driven directly by the gearbox, eliminating the need for a drive chain. It had a spar frame with stress-bearing outer panels in a 'step-through' platform with a front splash guard and the curves of the bodywork and front mudguard hinting at D'Ascanio's aeronautical background. The controls were mounted on the handlebar and it featured single-sided front suspension, interchangeable 200mm (Sin) wheels mounted on stub axles and a spare wheel mounted behind the seat. There was no rear suspension.

It is alleged that when Enrico Piaggio saw the prototype he exclaimed, "Sembra una vespa!" ("It resembles a wasp") and its name was decided. Piaggio patented the design in 1946. Rear suspension was added in 1948 along with a larger engine and in 1953 the headlamp was relocated to the handlebar. By the mid-1950s, Vespas were being manufactured under licence in Belgium, France, Germany, Spain and the UK, and in the 1960s production was launched in Brazil, India and Indonesia. There were two frame sizes and an extensive range of engine sizes from 50cc to 200cc. By 1970, four million had been sold.

Manufactured in Italy, assembled in NZ