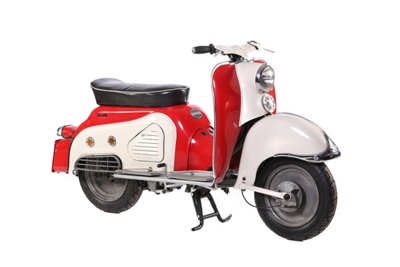 After the Second World War, Zündapp turned its attention from medium- and large-capacity, four-stroke motorcycle production to smaller, two-stroke machines including scooters in order to respond to the need for inexpensive transportation as Germany rebuilt. Like its compatriot, NSU, it turned to Italian designs as a basis to either copy or manufacture under licence. The Italian Parilla Greyhound design influenced Zündapp’s design for the Bella, of which around 130,000 were produced from 1953 to 1964. It features hydraulically-damped suspension with a one-sided leading-link front suspension strut and a heavily valanced front mudguard. The wheels are interchangeable.

Other Bella models with smaller engine capacities were discontinued in 1958 when sales had declined significantly but the 204 remained in production until 1964. It features a 197cc, single-cylinder, 10hp, two-stroke engine and a four-speed gearbox. Primary and secondary drive are by chain. Top speed is around 75mph (121kph).