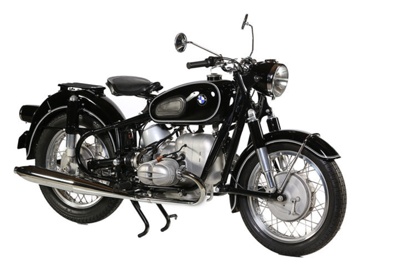 In 1960, the R69S was introduced. The earlier friction steering damper was replaced with a hydraulic damper mounted under the lower triple clamp to help reduce the head shake that could be exacerbated by the unsprung weight of the Earles fork design. The R69S was available throughout the 1960s and for the first time, BMW offered a choice of colours other than the traditional black. White with black pin striping proved popular but the other colour choices were rarely seen. In total, 11,319 R69Ss were sold worldwide.

This example was purchased for the Nelson NZ Classic Motorcycle collection in October, 2008, from its third owner, a private vendor in Grapevine, Texas. It had undergone a complete restoration in 2007 with the engine, transmission and drivetrain rebuilt by professional BMW mechanics and the frame bead blasted and powder coated. It has been registered for road use in New Zealand. It was acquired by Transport World for the Classic Motorcycle Mecca collection in May, 2016.