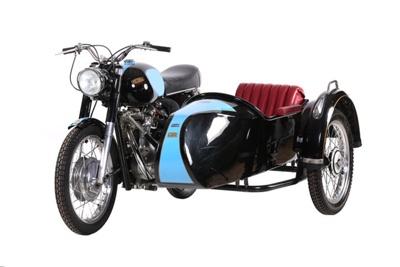 Victoria was a bicycle manufacturer in Nürnberg, Germany, that began producing motorcycles in 1901. Its motorcycles were equipped with proprietary engines supplied by manufactures including BMW, Fafnir, FN, ILO, Minerva, Sturmey-Archer and Zédel until 1923 when the company began the production of the first of many of its own engines, an overhead-valve, flat twin. Victoria produced Germany’s first forced induction engine in 1925 and set a speed record of 165kph (102.5mph) the following year. In 1932, the company won the sidecar class of the European Hill Climb Championship with a 600cc machine.

The factory was badly damaged during the Second World War but resumed in 1946 with a small bicycle engine. Small-capacity motorcycle production resumed in 1950 and by 1953 it was offering a 350cc model and in 1955 introduced the Peggy motor scooter. In 1957, Victoria launched a new model equipped with the 175cc high-camshaft Parilla engine. The following year, Victoria was merged with DKW and Express Werke to form Zweirad Union, which continued the production of Vicky mopeds and motor scooters until production was terminated in 1966.

Moto Parilla developed the high-camshaft, 175cc, single-cylinder engine in 1953 and it was later developed into a highly-successful 250cc racing engine. It featured a chain-driven camshaft mounted high on the engine that acted on two short pushrods which, in turn, acted on rockers with screw adjusters, offering the advantages of an overhead camshaft engine with the simple adjustment of a push-rod design.

This 1958 Victoria Parilla is equipped with a luxurious Steib sidecar. It was purchased for the NZ Classic Motorcycles collection via a US auction house from a private vendor in Tarzana, California, in January, 2011.