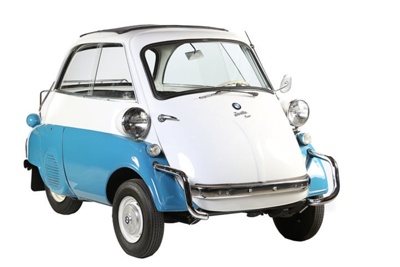 In the austere circumstances of post-war Germany, the ‘baby’ car concept had ready appeal and in 1953, the Italian Iso company began manufacturing a well-designed one known as the Isetta (little Iso). In 1955, BMW began manufacturing the Isetta under licence but badged as a BMW and powered by a 247cc, single-cylinder, four-stroke engine similar to that used in the R25 motorcycle in place of the 236cc two-stroke unit used by Iso. There was also a choice of a 298cc engine. Both engines were combined with a four-speed gearbox. At first, BMW Isettas were exported to the UK but Isetta of Great Britain was established and also began manufacturing them under licence although without the BMW badge.

Isettas were available with either one or two rear wheels, the latter being popular in the UK where they could be registered inexpensively as a motorcycle and sidecar combination. The steering wheel was attached to the front-mounted door but cranked so that it moved to enable ingress and egress for the two passengers it could carry. Performance was modest with a top speed of 88kph (55mph) and the single-cylinder engine driving the rear wheel(s) from behind the seat produced considerable noise and vibration. Isettas were also built under licence in Belgium, Brazil, France and Spain, and more than 160,000 were sold between 1953 and 1963.

This fully restored BMW example of the four-wheel, 300cc model was acquired for the Nelson NZCM collection from St. Louis, Missouri, in April, 2009. It was then acquired by Transport World for the Classic Motorcycle Mecca collection in May 2016.