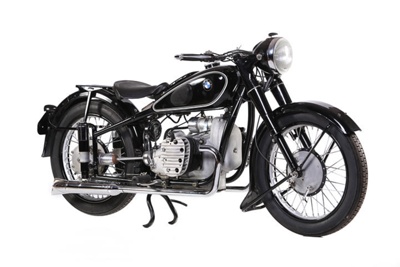 In 1936, BMW dispensed with its pressed steel frame designs and introduced a welded, tubular steel frame on the R5 model along with telescopic front forks. The R5's sporting 500cc overhead-valve engine was also new and the following year a 600cc side-valve engine was developed for the same running gear to provide a touring solo or sidecar mount.

In 1938 the R5 and R6 were replaced by the R51 and R61, respectively, with the only significant difference being plunger rear suspension. To expand the range, a new, larger, 750cc flat-twin engine with the same stroke as the R61 was introduced as the R71. It was the last side-valve engine sold by BMW and, with its power output biased towards high torque rather than high horsepower for sidecar applications, its peak power output was just 22hp at 4,600rpm. Nevertheless, the R71 was not slow and it was capable of a top speed of 77mph (124kph). Only around 2,200 examples were manufactured during the first year and production in 1941, the final year, had fallen to around 500. After the Second World War, the design was revived in the USSR as the Ural.