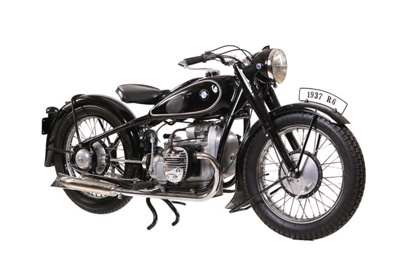 In 1936, BMW introduced the R5, which was one of the most technologically advanced motorcycles of the day. The 500cc, overhead-valve, flat twin-cylinder engine drew on experience gained with the company's supercharged racers that featured an all-welded, tubular steel frame and telescopic forks with adjustable damping. The same frame design was used for the 1937 R6 although it was marketed as a tourer and sidecar mount rather than a sports bike and the engine, the company's largest to date, was a 596cc, side-valve, flat twin coupled to a four-speed, foot-change gearbox. The engine was fed by twin Amal carburettors made under licence by Fischer and was capable of producing 18bhp at 4,500 rpm.

R6 production lasted only one year because it was replaced by the R61 launched in 1938. The only significant difference between the R6 and R61 was that the latter shared with its R51 stablemate the honour of being the first production motorcycles with plunger rear suspension. As a consequence, only 1,850 R6s were produced and it is thought that there may be only about 50 left in the world today. This example was purchased for the NZ Classic Motorcycles collection from a private collector and restorer in Daly City, California, in July, 2008. It was acquired by Transport World for their Classic Motorcycle Mecca collection in May 2016.