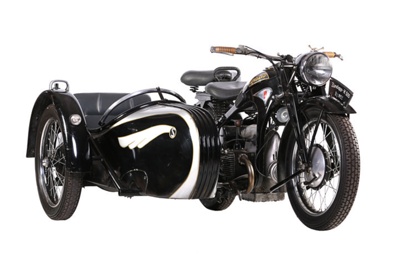 Zündapp was founded during the First World War to manufacture detonators and produced its first motorcycle in 1921 using Levis two-stroke engines of 211cc and 246cc capacity. In 1924, the company began manufacturing its own engines and sold more than 10,000 motorcycles that year. The first Zündapp four-stroke was produced in 1930 using a Rudge Python engine and by 1933 the company had manufactured 100,000 motorcycles. That year, it introduced its first horizontally-opposed, side-valve, four-stroke, twin- and four-cylinder engines for the K-series motorcycles, the 'K' standing for 'Kardanantrieb', which means 'enclosed driveshaft'. The 1933 K models were the twin-cylinder K400 (398cc) and K500 (498cc), and the four-cylinder K600 (598cc) and K800 (804cc).


The K500 produced 13hp (later 16hp) at 4,800rpm. The four-speed, hand-change gearbox is of an unconventional, all-chain design with a separate chain for each ratio. The sturdy frame and single-spring girder forks are fabricated from pressed steel. Its top speed is 100kph to 105kph (62mph to 65mph).


More than 15,000 K500s were produced between 1933 and 1939. This 1933 example fitted with a Stoye sidecar was purchased for the NZ Classic Motorcycles collection from a private vendor in Tremelo, Belgium, in April, 2009. It was acquired by Transport World for their Classic Motorcycle Mecca collection in May 2016.