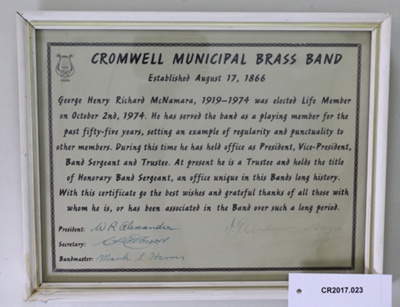 Framed certificate from Cromwell Municipal Brass Band to George Henry Richard McNamara when he was elected a Life Member of the Band on October 2 1974. At the time George had been a member of the Band for 55 years.

CROMWELL MUNICIPAL BRASS BAND
Established August 17, 1866
George Henry Richard McNamara, 1919-1974 was elected Life Member on October 2nd, 1974. He has served the band as a playing member for the past fifty-five years, setting an example of regularity and punctuality to other members. During this time he has held office as Presdent, Vice-President, Band Sergeant, and holds the title of Honorary Band Sergeant, an office unique in this Bands long history.
With this certificate go the best wishes and grateful thanks of all those with whom he is, or has been associated in the Band over such a long period.
President: W.R. Alexander I. G. Anderson Mayor
Secretary: C.A. Ellwood
Bandmaster: Mark S. Harris