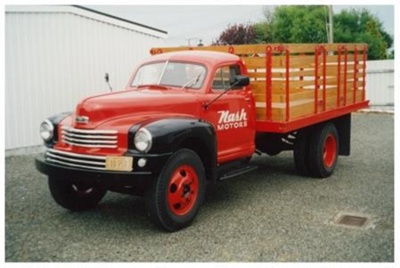 Year: 1948
Make: Nash
Model: 3248A Haul Thrift
Serial No: 1497
Engine Make: Nash
Engine Type: Overhead Valve 6
Engine Model: T235
In3: 235
GVWlbs: 15500
One of 3,584 built from 1947 until Nash stopped making trucks in 1951, (the last was assembled by Diamond T), this Nash 3248A Haul Thrift is equipped with a Timken 2 speed rear axle.
Almost all were exported, mainly to Mexico, South America and Europe. Approximately 50 found their way to Tasmania. Those that weren’t exported were short wheelbase models destined for Nash dealers as wrecking cranes. This long wheel base one is unique in that it was used at the Nash Motors factory in Kenosha, Wisconsin for 20 years. Sometime between 1968 and 1971 it was purchased by an ex-employee, Joseph Jiardine of American Motors (Nash producers). In early 1982 it was sold to John Kloski, who sold it to George Schaaf, a collector of Chicago in approximately 1990. Bill Richardson bought it from him in 2002.