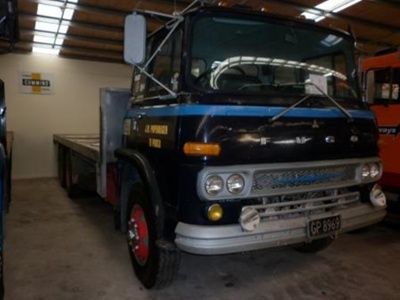 Year: 1973
Make: Fuso
Model: TR 932 KA
Serial No: 20071
Engine Make: Mitsubishi
In3: 14886
GVWlbs: 46775
This was the first Fuso (Mitsubishi) on the road in Southland. The original 300 HP pre combustion chamber motor only lasted one season and was replaced with a 305 HP direct injection motor that proved both reliable and a good performer and is still in the truck today. Even after 30 years of use the differentials have never been touched and the back brake drums and linings are still original.
This truck was purchased new by John Popenhagen of Waipahi Transport in 1973 for $36,000. VTR Motors were the agent and Sid Syme the salesman. John's son Geoff took over Waipahi Transport in the 1980s and John went farming at Te Pirita in Canterbury. The truck continued working at Waipahi until 1983. It was then used on John's farm in Canterbury until he sold the farm in 2003 when he gave the truck to Bill Richardson.