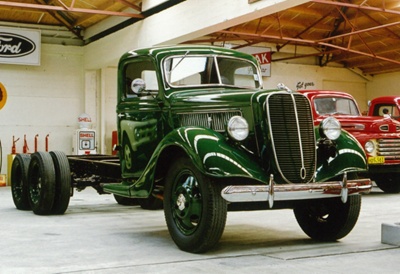 Year: 1937
Make: Ford
Model: Sussex
Engine Make: Ford
Engine Type: Side Valve V8
In3: 221
GVWlbs: 16700
This truck was registered new on 1 June 1938 to the Te Awamutu Power Board, sold to Silvester Verity, a contractor in Te Awamutu in 1954, then to his son Don Verity in 1962. Don donated it to the museum in June 2004 and we restored it in 2005.
Parts of this truck came from a truck that was originally owned by Ellesmere Transport, which had been restored by Kevin Twiss. He had built a replica fuel tanker on it for Mobil oil and as we already had one of the same models on display we used the cab and all the front panels on this truck.