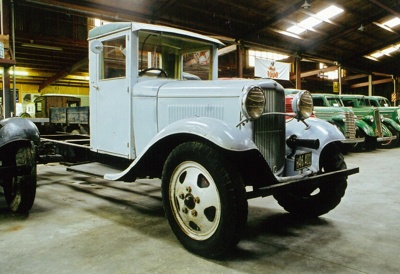 Year: 1932
Make: Ford
Model: BB
Engine Make: Ford
Engine Type: Side Valve 4
Capacity: 3.3L
It is thought this truck was bought new by Hawarden Garage & Transport and inherited by Mr Yorston (who bought Hawarden Garage & Transport in 1946). He used it as a school bus (the body sat on a flat deck). He then sold it in 1952 to J. L. Smellie, a local farmer, who used it as a farm truck until he gave it to the Hawarden Volunteer Fire Brigade in 1958, who used it as a water tanker. They sold it in 1968 to G. T. Newton, another local farmer who then sold it back to the Yorstons in 1976. They put a bus type body on the deck for the centennial of the Hawarden School and after the parade it sat in their shed until Bill Richardson bought it in April 1997.