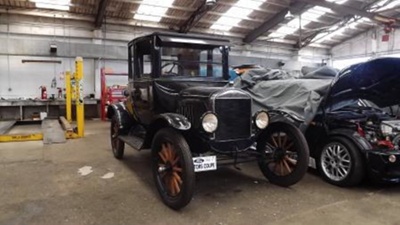 Year: 1922
Make: Ford
Model: Model T Coupe
Engine Make: Ford
Engine Type: 2.9L 20ho Inline 4
GVWlbs: 1200
Wheelbase: 100"
The model T was Ford’s most successful model, producing over 15 million cars between 1908 and 1927.
This truck was originally owned by Fred Eason of Otautau, who used it to deliver bread to Drummond. Terry Eason bought it around 1956, then it was lost until the 1960s when Frank Robson of Gore owned it. He restored it and used it on a road trip around the North Island. In 1990 it was bought by Jim Cooper, where it joined the collection now owned by BRTW.
Excerpt from information from Elaine Nicolson-Winter, granddaughter of Frederick ‘Fred’ Thomas Miller Eason (12/09/1877 - 07/10/1956).
“Fred Eason’s 1922 Model T Coupe also nicknamed ‘Lizzie’ or ‘Grandma Duck’s’ (from the then popular Donald Duck comics).
The Model T was a two seater with a fold out ‘Dickie Seat’ between the back window and boot. Fred bought ‘Lizzie’ about 1950 and his prior transport was a bicycle, which had an offset pedal crank on the front sprocket of the bike to accommodate his injured hip. The Model T only needed one leg or foot to make the car move forward or backward (a very early type of automatic gearbox). Most cars of that time needed both feet to operate the clutch and accelerate. The Model T accelerator was hand operated by the steering wheel.
Fred used ‘Lizzie’ to deliver bread from Lange’s Bakery, Otautau to Drummond and Fairfax Stores. Fred and ‘Lizzie’ were very well known around Otautau and the local lads used to call out when Fred was driving around – “Look out, here comes the Runaway Dunny”. During the football season, Fred liked to attend games at the Holt Park. ‘Lizzie’ was one of the few cars that could drive around Holt Park in winter without getting stuck in the mud. This caused quite a bit of amusement, especially when most of the modern cars at that time couldn’t go off the road without getting stuck.
A week before he died in 1956, Fred painted ‘Lizzie’ a light blue as the Model T came in only one colour – “Black”. Terry Eason bought the car from the Estate and it was moved down to Otatara when the family moved from Otautau.
Terry sold the car a few years later, and Frank Robson of Gore eventually owned it around the 1960s. The car was still in remarkable condition for its age and only needed a front mud guard to complete the car, which was still painted blue.
The Robson’s restored ‘Lizzie’ and she was taken on her first vintage car rally (about 1972) down to Riverton with Robson’s 15 year old daughter behind the wheel. Mr and Mrs Robson toured the North Island in ‘Lizzie’ and she never missed a beat. They arrived home late at night from the North Island trip, parked ‘Lizzie’ in the garage and went out in the morning to unpack ‘Lizzie’ to find a flat tyre, the only mishap for the entire trip.
Frank Robson died in 1989 and in 1990 Jim Cooper, who used to live in the South Otago area, bought ‘Lizzie’ and shipped her to his home in Darwin, Australia. Jim still owns ‘Lizzie’ and has her displayed in his museum along with many other early Ford cars. Jim Cooper has interests in Road Trains and mining equipment in Australia. ‘Lizzie’ is still roadworthy and is maintained by an ex Dunedin mechanic.”