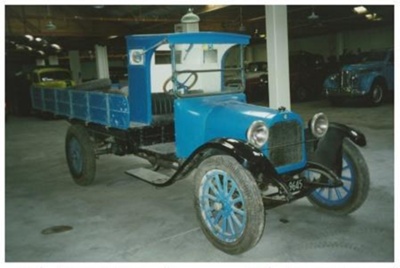 Year: 1917
Make: Graham Bros
Model: 30 cwt Truck Builder
Serial No: 17246
Engine Make: Dodge
Engine Type: 4 Cylinder Side Valve
This truck was originally a bus bought new by R. Williams of Oamaru. It was traded to International Harvester Co. in 1927 and bought by Mr Edge who had a coal mine at Waikaka and he delivered coal to Gore and surrounds with it. In 1935 he fitted second hand Gutta Percha tyres to it, some of which are still on it. It was bought in 1969 by Bill Anderton and restored. Geo Hedley bought it in 1980 and Bill Richardson bought it from his daughter Sandra in 2002.
The Graham Bros used Torbenson axles behind Dodge cars to make these 30cwt trucks, and eventually became on of America's major truck manufacturers.