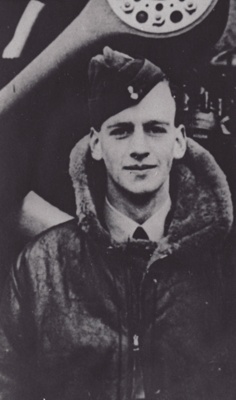 A copy of a black and white photograph taken of William Henry (Billy) Russell in his air force uniform.

Billy's father was a paper maker who immigrated to Mataura from England in the 1920s to work in the Mataura Paper Mill. Billy went to school in Mataura and like many of his generation fought in World War Two. He flew a Spitfire and was shot down over France on 10 August 1941, losing his left arm above the elbow. The amputation occurred in a German-run hospital, St. Omer, which incidentally was where the famous air force pilot, Douglas Bader was recuperating after a crash of his own. During an escape attempt, Bader used sheets off Billy's bed while he was comatose, and his bed was even moved to under the window to anchor the tied sheets.

Captured by the Germans, Billy was a prisoner-of-war in Stalag VIII b until 1943 when he was repatriated to England. Back in England, he was fitted with an artificial limb and re-trained as a non-combat pilot before losing his life in an aircraft crash over Wales on 28 February 1945. He is buried in Chester (Blacon) Cemetery, Cheshire, England.