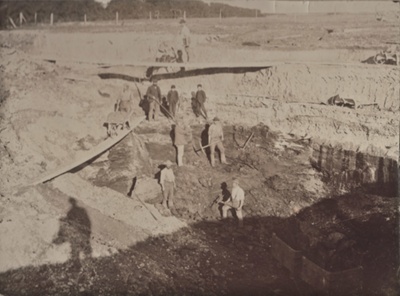 A black and white photograph depicting a scene from the everyday workings of the open face coal pit by employees of C.P. Sleeman. Two men are walking loaded wheelbarrows across narrow planks placed over sides of the pit, while other men are using pick axes to chip away at the exposed face of the coal.

Charles Palmer Sleeman had two successful pits, the first one called the 'Mataura Pit', opened in 1893, and the second was the 'Waimumu Pit', opened in 1897. He had other interests in Mataura, which included being a devout Anglican and actively helping to establish a church in town; being a town council member from 1896 until 1935; and being a founding member of the local Brass Band.

He used his musical accomplishments one evening to entertain a number of Mataura residents in order to celebrate the opening of the tram line from his coal pit at Waimumu to the Mataura train station - the tram line being expected to greatly increase the output of his pit. (Reported in the Otago Witness, 23 August 1900.)