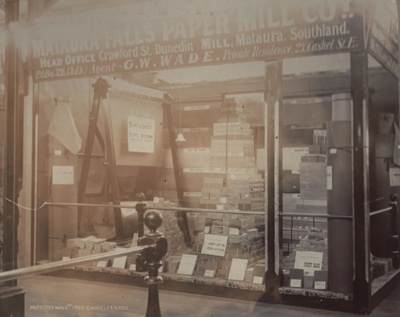 A black and white photograph depicting a display of products of Mataura Falls Paper Mills Limited in a stand at the Canterbury Jubilee Industrial Exhibition which was held in Christchurch in 1900/1901. The display is behind glass and has a similar look to a store front window display. Included are a variety of the products produced by the Mataura Falls Paper Mills. The Company won an Award for its products, we have this Award in our Collection refer to MT2012.15.10.

The Mataura Paper Mill was one of many businesses and industries who had stands inside the newly-built Agricultural and Industrial Hall (as it was known then), and from all accounts the Exhibition was very popular during its three months stint.

The Agricultural and Industrial Hall was formally opened on 1 November 1900 and the jubilee exhibition opened that afternoon, which was declared a public holiday. The exhibition covered 74,000 square feet (6,900 m2) and took up two thirds of the city block described by Manchester, Gloucester, Worcester Streets and Latimer Square. It closed on 31 January 1901, having been visited by nearly 250,000 people, with a surplus of £3000. (taken from: http://en.wikipedia.org/wiki/Civic,_Christchurch)

According to a report in the Otago Daily Times dated 3 November 1900, very few exhibitors were from the Dunedin area.

Centred along bottom of mounting, between wording is an official monogram, featuring a lion and a unicorn, with a crown on a circle featuring a motto, and ribbon underneath the circle.
On reverse of mounting is glued A4 paper, onto that two smaller pieces of paper have been attached (another one was present at some stage but has been removed).
On the top piece of paper is printed: 'HERE IS NEWS! / KORES CONTACT COPY PAPER / (pronounced KOR-EEZ) / strongly established in Britain, Europe and North America, / is NOW MADE IN NEW ZEALAND'
On the second paper is printed a cartoon sketch of two men in conversation.