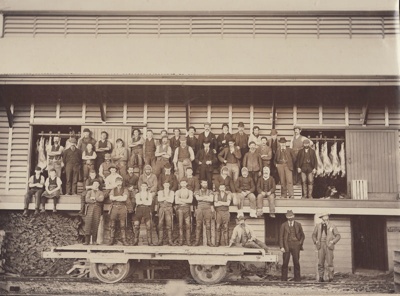 Undated black and white photograph of staff at the Mataura Freezing Works. We think it was taken at the Charlton killing sheds which were part of the Works between 1893 and 1898. The carcasses in the photograph are in a cooling room where they 'set' before they were put in specially built vans and taken on a tramway to the main plant.

'GEO Blackley Photo' is stamped on the front and reverse of the mount.
'P. Dore' is written in pencil on the reverse.