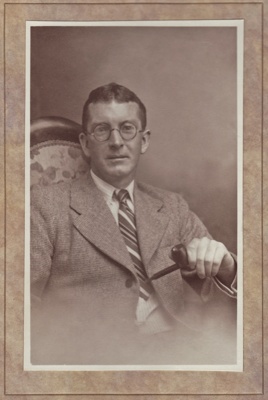 A portrait of Thomas George Quilter.

Thomas grew up in Mataura where his father operated a cordial factory. After attending Mataura School and Southland Technical College, Thomas trained as an engineer and joined the State Forest Service. He worked in Southland, on the West Coast, in the Bay of Plenty and Te Urewera.

Love called and he eloped, marrying a young Mataura woman, Clara Catherine McConnell on 29 January 1940. Thomas joined the New Zealand Army in February 1940 and left New Zealand in May that year. Sadly he never saw Clara again. The tragedy was intensified by the fact that Clara was pregnant with their son Geoffrey when Thomas left New Zealand.

Thomas initially served as a Quarter Master Sergeant with the N.Z. Army's 11th Forestry Unit in England but transferred to the British Army's, Royal Engineers on 14 October 1940 with the rank of Second Lieutenant. He later trained in bomb disposal and saw active service in North Africa as part of Operation Torch. Sadly he died on 20 February 1943 and is buried at the Bone War Cemetery in Annaba, Algeria.

The Quilter and McConnell families wrapped themselves around Clara and her son Geoffrey. Clara lived in Mataura for the rest of her life later marrying Ray Hicks in 1951. After finishing school Geoffrey followed in his father's steps as a forester with the N.Z. Forest Service.

We have a significant collection of Thomas, Clara and Geoffrey Quilter's papers and personal effects. Collectively they provide a closer insight as to how World War Two affected a local family. We have Thomas' papers and effects because the British Army returned them to Clara who kept them. Tracy Hicks (Clara's second son) kindly donated this valuable collection to us.