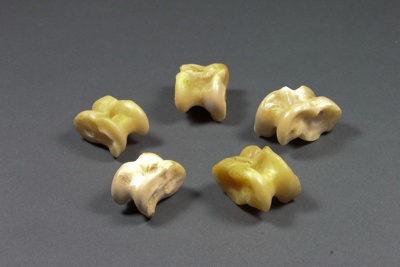 Knuckle bones; this set of five knuckle bones was donated to us by one of our members, Mrs Edna McKelvie. Edna's late husband Ian, co-owned McKelvie's butcher's store in Mataura from the late the 1940s to 1985. Ian's father, Logie established the business c.1928. In his role as a Scout leader Ian also used bones from the butchery to make scarf woggles for Mataura's cubs and scouts. The 5 knuckle bone set was used by children as a school playground game, involving a fair bit of competition.