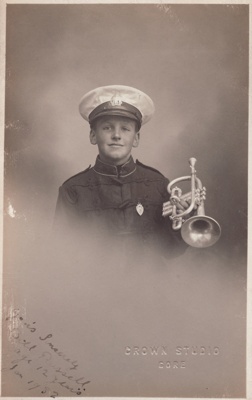 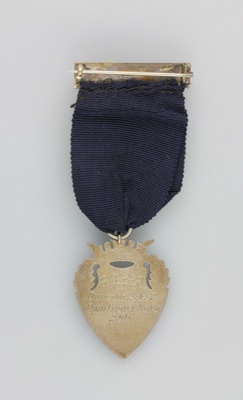 Medal; awarded to William Henry (Billy) Russell for coming second in the 'own choice' section at the Otago District Brass Band Competition at Dunedin on 23 January 1932. Billy played cornet in the Mataura Town Band and was aged 12 when he won this medal. We have a great photograph of the Mataura Town Band celebrating its success at the above competition. 1932 was a good year for Billy as he was also Dux of Mataura School that year.

Billy was born in Manchester, England and came to New Zealand in 1925 as a 5 year old when his father John immigrated to take up a job (as a paper colourer) at the Mataura Paper Mill. After attending Mataura School and Gore High School Billy worked as a clerk at the Mataura Paper Mill. Like so many of his generation, Billy fought in World War Two. He joined the RNZAF, gained his wings and flew Spitfires. The odds caught up with him on his 39th sortie when he was shot down over France on 10 August 1941, losing his left arm at a point above the elbow.