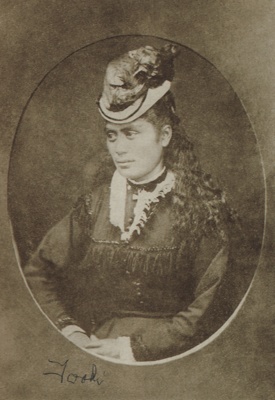 A scan of a photograph of Toke Mere Reko. Toke was the daughter of Reko and was born at Tuturau in c.1848. As a girl she was sent to Ruapuke Island to attend Reverend Wohler's school, where she was baptised Mary Reko in 1862. She returned to Tuturau and married Robert Gourlay in 1876 and they farmed Toke's family's land. On legal documents Toke used the name Mary Margaret Gourlay or Catherine but she was known as 'Queenie' to the settlers and died in 1919 aged 71. She is buried in the urupā, known as Pikiraki, at Tuturau, 50 yards from where she was born.

Handwritten on the back by Don Hesselin:'Tooki Mere Reko daughter of Chief Reko and mother Pi born at Tuturau and buried in the Pikiraki urupā, 50 yards from where she was born. She married Robert Gourlay and they had a large family'.