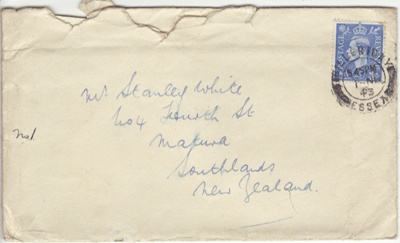 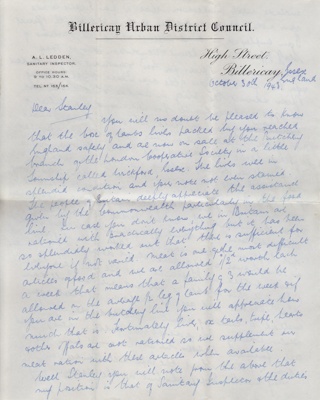 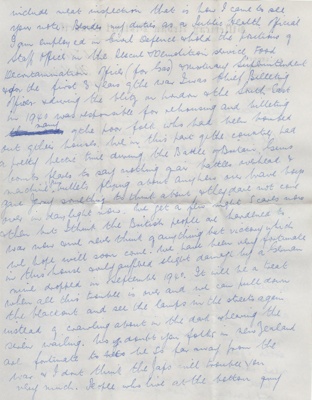 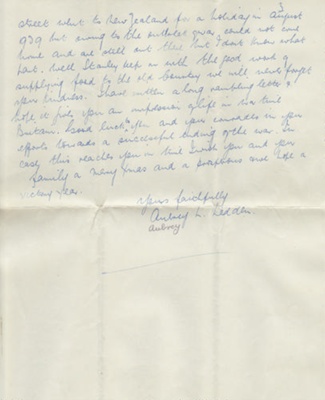 Letter from Aubrey Ledden (Billericay, England) to Stanley White (Mataura, New Zealand) dated 30 October 1943. This is the first in a series of letters that Stan received from Aubrey Ledden who was a Sanitary Inspector with the Billericay Urban District Council.

Stan and Aubrey became pen pals after Stan slipped a note into a consignment of lamb livers while working at the Mataura Freezing Works during World War Two. One of Stan's jobs was to pack lambs' livers in tin billies. The billies were then boxed, frozen and exported to England. For fun Stan wrote his name and address on a piece of paper and added 'please write to me'. He then slipped this note between the cellophane that covered the livers and the lid of the tins. Aubrey found the note when inspecting one of the consignments.

Aubrey starts the letter by letting Stan know that the livers arrived England safely and were for sale in the butchery of the London Cooperative Society in Wickford, Essex. Aubrey lets Stan know that his original note wasn't even stained. Aubrey goes on to give Stan an impression of life in war time Britain. He says how thankful Britain is for the Commonwealth's supply of food, refers to rationing and gives examples of what it meant for the average family. Aubrey then outlines his work, civil defence and billeting roles. Aubrey tells Stan about the Battle of Britain and its effects on Southern England and ends the letter by yearning for the end of the War.

Five months after we put the letters online Aubrey’s son, Geoff (who lives in England) found the letters and made contact with us. Here is part of his email:

'I’m writing to tell you about the most amazing discovery that we have just made. I was stunned to discover that you have a collection of seven letters written by my father to Stanley White in Mataura between 1943 and 1948. I have just spent time downloading and reading this correspondence, a very emotional experience as my father died in 1968 when I was living in Italy and, unfortunately, all his papers were destroyed….the correspondence is full of the most fascinating information for me and our family.

My sister, Violet Bridson, will be as thrilled as I am at the discovery of these letters and we cannot thank you enough for preserving them and making them available online. It is the most exciting and emotional discovery that I have come across in 14 years of family history research.'

Stan is now 86 and lives in Main Street, Mataura. Geoff came to New Zealand in February 2014 to meet Stan and close this wonderful circle.