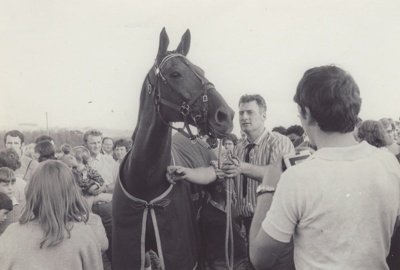 A black and white photograph of Cardigan Bay surrounded by fans. Cardigan Bay (1955-1988) was the first harness racing horse to win $1 million in prize money. He was bred in Mataura at the Todd family's Chimes Lodge Stud on Exeter Street (which has subsequently been renamed Cardigan Bay Road). Cardigan Bay won all the major Australasian races including the New Zealand Cup, the Auckland Cup and the Inter-Dominion Final in Adelaide, Australia. In 1964 after dominating Southern Hemisphere racing, he was taken to the USA to race. Perhaps his most famous race was his 1966 victory at Yonkers Raceway, New York over the champion standard bred, Bret Hanover in a race described as the Pace of the Century. After securing his history making $1 million in stakes he was immediately retired to New Zealand