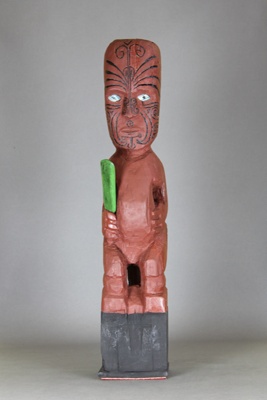 Tekoteko; (carved figure on the gable of a house). In 1937 a group of Mataura locals built a monument and whare (Te Wairua) at Tuturau to mark the centennial of Te Pūoho’s raid, the decisive event of which occurred in Tuturau in December 1836. The centennial celebrations were delayed a year due to a polio outbreak. This tekoteko sat on top of the whare.

The carver was Charles Devonshire, a pakeha from Kirwee in Canterbury, who had an interest in the Tuturau reserve. The Hesselin family rescued it from vandals and later donated it us.