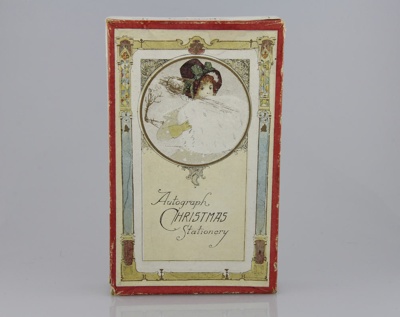 Stationery box; dating from 1910-1916. We think it belonged to Mrs Alice Clearwater who used it to store items sent by her son Rifleman Tom Clearwater from France while he served in the New Zealand Army during World War One. It was given to us with a postcard from Tom to his mother, six silk handkerchiefs also gifts sent from France by Tom to his mother and a 1913-1914 Singer Sewing Machine calendar: MT2012.33.1 to MT2012.33.8 (inclusive).