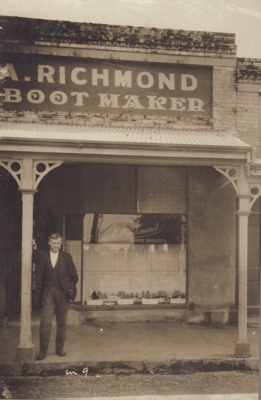 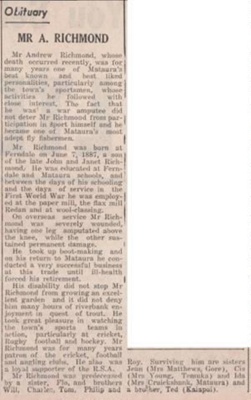 A black and white photograph of Andrew (Andy) Richmond [1888-1970] standing outside his boot maker's shop in Bridge Street, Mataura. Andy Richmond served in World War One losing his right leg and wounding his left. He owned a boot makers shop in Mataura from 1926 to 1948 when he sold his business to Alister 'Booty' Thompson.

Mr Thompson donated this photograph to us and recalled how Andy Richmond used to resort to the booze to relieve the pain in his remaining leg and that this could see the shop closed for extended periods. Despite these closures Andy Richmond's customers remained loyal and waited for him to return to work rather than sending their repairs elsewhere.

Andrew Richmond's war service records indicate that he was wounded in action on 28 August 1918 but do not give a location. However the Official History of the Otago Regiment in the Great War indicates that this likely occurred during the second battle of Bapaume in France.

In a nice touch, Mr Thompson also kindly donated us a pair of O'Brien boots made for Andy Richmond's 'good' leg.

'm9' is printed in white ink on the the bottom left hand corner of the photograph.