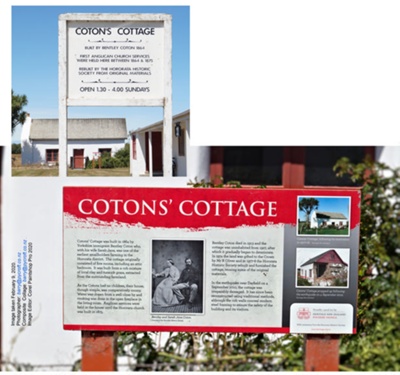 Hororata Historical Society maintains the historic Cotons' Cottage and the Hororata Museum, which contain a wide range of artefacts, archives and photographs relating to the history of our district. Set on a beautiful rural site with plenty of parking, the cottage and museum are a great destination for those exploring the countryside, and for anyone interested in New Zealand history.

Coton's cottage was first built in 1864 by Bentley Coton, one of Hororata's original settlers. The first Church of England services were held in this cottage before a church was built in this area. The cob cottage was rebuilt in 1977/78 by the Hororata Historical Society, under the guidance of the NZ Historic Places Trust, and has been further restored since the 2010-2011 earthquakes.

Set alongside the cottage and garden is the Hororata Museum, which also has an unusual history, as the building was originally the totalisator from the local Trotting Club. For those interested in agricultural history, there is also the 'stinky' to visit - which was essentially a caravan used to house agricultural workers.

1:30pm - 4pm every Sunday, September to May. Open by appointment for bus tours, schools and community groups.

Photography and Multimedia - View All (5)