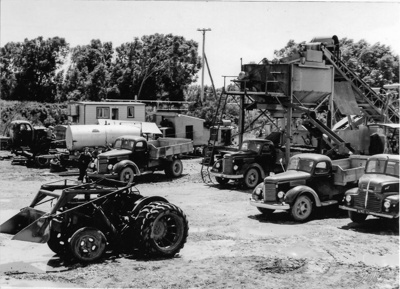 This is a photograph of Steve Kokay's mobile gravel plant - in this photo it is situated near the Yellow Bluff Bridge, just out of Otautau, we think possibly sometime during the 1950s.

Quite a few of the local men, who were lads at the time this machinery was in operation, remember the lovely big hole it dug out in the riverbed at the Yellow Bluff Bridge and how they used to go swimming in this hole.

Operating for a number of years, Steve's Mobile Gravel Plant was a common sight around the Waiau Riding and further afield, to work on roads and other projects. Steve and his workers constructed, maintained and gravelled many of Western Southland's roads using the plant designed and built Steve.

In 1911 at the age of 13 years, Stephen Kokay immigrated from Csongrãd, Hungary to New Zealand with his family and families of close friends of his parents, who were all related on his mother's line. The Rãcz's, family and friends of the Kokay family, had already immigrated and settled in the Tuatapere district.

Stephen's father Istvãn Kõkai, who was also called Stephen (Snr.), on coming to New Zealand with his wife Verona (nee Surãnyi) and their children, decided to change the family name to Kokay, as he said no-one knew how to pronounce their original Hungarian name. A home was built by Stephen Snr. for the family, literally sledged out in the bush near Tuatapere, up the Groveburn Valley. Originally the family had lived in a tent up the Lillburn, but then moved and settled on land bought at Groveburn. The life was not an easy one. Everything that the family needed, had to be sledged in over the rough bush track through trees to his then remote residence.

Stephen Jnr (Steve), married an Otautau girl Ada Constance (Connie) Eason, daughter of Fred Eason and Alice (nee Hill) of Otautau, on 20 June 1945, at the Otautau Methodist Church. Steve and Connie took up residence in Steve's new property out the Papatotara Road, and this was named "Arpad" after a famous Hungarian leader. This is where they bought up their own 4 children, Verona, Margaret, Leslie and Ilona.

In 1956, Steve and Connie travelled back to his birthplace in Hungary. The timing of the couples visit coincided with the Revolution of October 1956. With the borders all closed, the couple had to be helped out of the country by the British Consul, who intervened and actually sent a legation with transport, to get them safely across the border into Austria.

The Kokay (Kõkai) family are among the earliest of Hungarian immigrants to settle in New Zealand. Roughly 100, Hungarian immigrants from Csongrãd settled in Southland in the first decade of the 20th-century. In the beginning, acceptance into the Southland community was difficult, however, the Hungarian people preserved. Steve (Jnr) Kokay became a respected businessman and was elected to the Wallace County Council and descendants of the Csongrád families like the Kokay's remain in the district today.