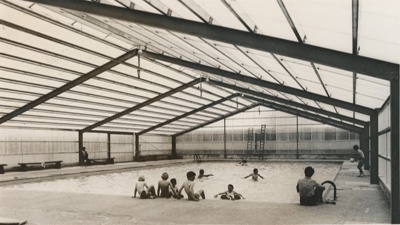 This is a photograph of the Otautau Baths, shortly after the newly installed roof was officially opened, and is part of a series of images showcasing the construction of the pool facilities from the initial groundwork onwards.

Otautau had hugely popular open-air baths that opened in 1937 which were found to leak heavily by the early 70s; and no attempts to fix the problem were successful for long. It was also discovered that it had been built without reinforcement, making it only a matter of time before the structure failed entirely.

This pool was built in 1977 to replace the original baths, with many local businesses and people giving time, materials, and money freely to help with the construction. Black polythene was used to try and keep the heat in unsuccessfully, and actively heating the water was deemed too expensive - so the roof, as shown in this photograph, was built out of duralite.

This photo was originally published in the Southland Times, December 1984.