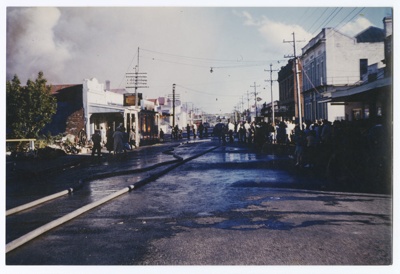 This is a photograph of the fire at J E Wright's Building, Main Street, Otautau, 1961.

The 1961 fire was the first of two disastrous fires to hit the Otautau firm of J.E. Wright's in just four years. Ernie Wright used to have his shop and attached home, opposite what is now the Supervalue (in 2018), with a workshop out the back. On the occasion photographed here, Ernie Wright lost his home and shop, when a fire broke out, gutting all the buildings and creating damage to the tune of 25,000 pounds. It was believed at the time, that a lack of a reserved water supply in Otautau, was the main reason that the damage was so extensive.

The fire was so intense, that the older ones in town remember the heat that carried across the street and broke the glass windows in Ernie's new shop, which he had only recently built, melted the signage and blistered and peeled off the paint.

'The forestry people helped with the fire a lot, they used a wajax portable fire pump and blocked the gutters with sacks and used the water running back out from the fire. Water was pumped from the Otautau stream by the brigades v8 trailer pump initially. There was no water supply in Otautau back then, everyone got involved and helped. The BNZ Bank next door started burning, so people had to get in there and take out everything they could that was not personal banking papers/items. I remember that John Wilson had set up in the old JE Wright's building and everything had to be taken out of there and dumped in the new building. The windows broke and the signs burned.'

In 1965, a second fire occurred at J E Wrights. This time, even though the blaze had taken hold of the storeroom at the back of the main building and was well alight, the fire brigade managed to get it under control within 30 minutes. The firefighters felt that this was only due to the fact that the towns new water supply had been installed since the earlier fire, and if this had not been done, this second fire could have been even more deadly. The business was lucky this time around, and other than severe damage to the storeroom which was gutted, there was limited damaged. As Ernie's was the local hardware shop, there were paints, china, toys, Christmas stock, central heating units, deep freezers and washing machines in the store room, which were all destroyed. This would have been a huge blow after the earlier destructive fire in the older building, but Ernie picked up and carried on for the few more years he had left.

Ernie's new shop building, which received damage in the second 1965 fire, is now the premises housing Otautau Supervalue. The building opposite, known as Western Panelbeating, is built on the site of the old J E Wrights shop and home, which were destroyed by the first 1961 fire. (2020)