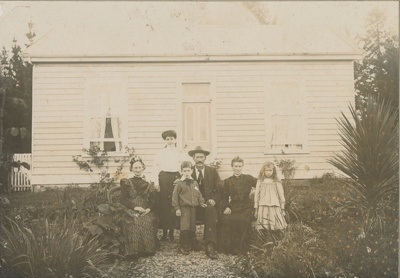 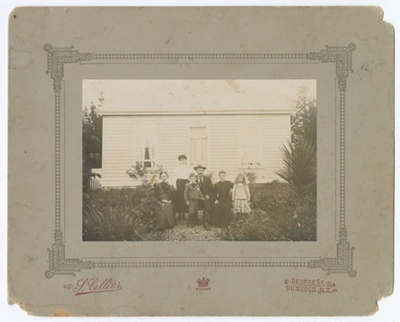 This is a photograph of the McKenize Family outside their 8-room house on their Glenburn property (south of Otautau). In a letter that came with the item, we find that this picture is from before a front veranda was attached to the property, and that there was a waterwheel in the creek beside the house.

Glenburn was 473 acres of prime agricultural land and ideally placed within a mile of both the Ringway and Otautau Railway Stations. The McKenzie Family purchased the property from Robert Meek in December 1901.

At the beginning of World War Two, the Government commandeered a portion of Glenburn, where they built a local linen flaxmill. The war had rendered the military's existing supplies of Indian hemp, unobtainable, so they turned to producing flax fibres instead. The flaxmill provided much needed employment for locals (mostly women), during the war with older residents remembering truck-loads of women and the flax they had harvested, heading to and from the plant. Local farmers were contracted to grow the flax, which was transported to the plant where it was broken down in large concrete tanks, heated via an old railway engine, and spread to dry in a huge wooden building, before the final processing was complete. The mill did not last long, as after the war imported fibres were again available.

From the 1950's until 1987, the site was the base for the NZ Forest Services local operations in the Western Southland District and there was a huge nursery, which was used to populate the new exotic planting (Pinus radiata) forests, replacing the native bush, which had been largely all logged out. An elderly resident remembers: 'We used to get evening and holiday jobs up at the forestry block, chasing away the birds and other animals. It was great fun and good pocket money'.

The Southland District Council (SDC), recently purchased the land with a view to providing an asset for both current and coming generations, with the encouragement of interested local parties.

In the interim, Alex McKenzie sold his own land at Glenburn, and went on to purchase farms at both Lake Hayes, and Makarora. When he retired in 1949, he was still an active man, involved in gardening and other interests. Alex died in 1961. The Alex McKenzie Memorial Arboretum has been established on the previously Government owned land, and is administered by a Charitable Trust of the same name. Some of the trees on this property date back to 1952, with much of the specimen trees planted to provide an interesting collection of both indigenous and exotic species. There are also some small blocks of trees of single specimens, set up to provide seeds to extend production around the local area. A further area provides a place for members of the public to plant a tree to commemorate a person or event in their family. There is an abundance of wildlife which is attracted to the arboretum, and there are facilities for overnight camping and many picnic areas.

Donated by the Foster Family