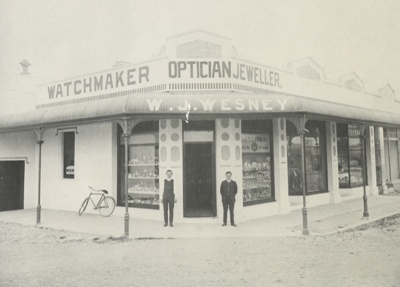 This is a photograph of Wesney's Jewellery Store, a small town business which became a national empire in New Zealand.

Bill Wesney opened the Wesney's first store in Riverton, where he lived at the time. Bill opened another store at Otautau in 1911. Wesney's advertised as having shops in both Otautau and Riverton from that time, so it is probable that Store Manager, SL (Stewart) McNeil, and Bill, would take it in turns to man each of the shops. Eventually Bill moved to Otautau with his first wife, and Stewart McNeil managed the Riverton store. In 1923, Wesney's closed their Riverton store leaving Bill to concentrate on his Otautau store and expansion.

Mick O' Brien, property owner of the building which Wesney’s operated out of, had to shift his pub into the jewellery shop after the Crown Pub burnt down. He lost his liquor licence due to lack of available accommodation, so instead of closing down, he simply forced the Wesney's to shift elsewhere. They set up shop temporarily in an old store beside the Jacquiery building in the middle of town, eventually rebuilding and moving into the remodelled old Harrington's building.

The Wesney's then moved their business back to an empty shop in the Jaquiery building after the 1932 fire burned out their entire premises further along the Main St, at Harrington's old building. It appears from photographs, advertising and news items of the day, that Wesney's at different points of time, were running their business simultaneously out of 3 shops. Even in 1984 and again in 1988, there are photos or advertisements placing them in at least two of these shops.

Wesney’s Jewellers was a major importer and manufacturer of jewellery in New Zealand, being the sole importers of Kienzle clocks and watches from Schwetzingen, Germany. It is believed that Bill's daughter Sybol and her husband, a gentleman named Smyth from Auckland, acted as distributors for much of what her father imported from overseas. The majority of the imports were first sent to Otautau and were distribution around NZ, to other Jewellers and Gift-Shop owners. Wesney’s employed at least two or three local women to do this work in the store attached to the Wesney's Jewellery and Gift shop.
An elder gentleman of the community recalls that the local Post Office in Otautau had a 'red hand-cart that crossed the Main St several times a day to and from the shop, handling the parcels that were both being put together and broken open at their store.'

The business experienced phenomenal growth in the late 1940's and 1950's, and after Bill's sons Jack and Ray became involved, turning the previous local manufacturing Jewellery and watchmaking business into an importing empire. Later, this led to a discussion about a possible move to a larger city centre which would be more cost effective for managing the business. The premature death of Ray in 1971, shelved this idea and so, the family stayed. Ultimately this may have spelled a death-knell to the business, which ended up struggling in the small town, which lost its banks and many other major businesses, including the Council Headquarters.