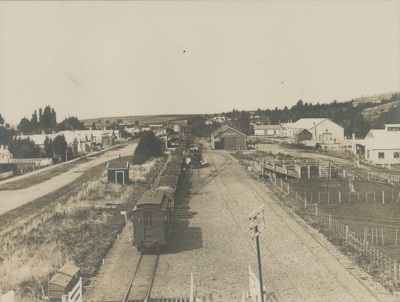 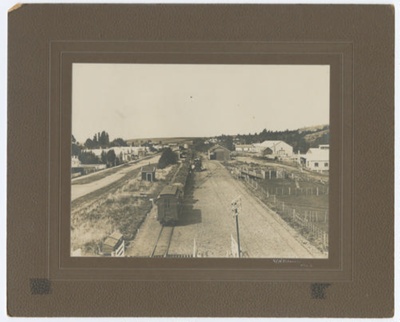 This is a photograph of the Otautau Railway Station. The first Railway Hotel can be seen opposite the Station behind the trees to the left of centre.

About the Line and Station:

The Otautau Railway line opened on the 15th December 1879 and is still in current operation (2018), transporting coal from the Takitimu Mine down through the Wairio Line to be delivered to Canterbury's Clandeboybe Dairy Factory.

In 1887 additions were made to the Railway Station due to the Stationmaster having to perform so many duties under one roof - from banking, money orders and rail travel, to post and telegraph services! By 1910, a long-sought after verandah was also attached which pleased the locals immensely.

The railway had a big impact on the community, changing the life of the Otautau Township and the people. They went from an isolated rural community to one with a direct link to the nearest towns and cities. But as road traffic started to take over in the 2nd quarter of the 20th-century, the rail traffic decreased and on 28 June 1954 the passenger service ceased.

The Wairio South line is the only remnant left from the many original branches of the rural railroads built in the late 1800s and early 1900s. Occasionally commemorative rail events mean a steam engine runs along the line, which is always exciting for locals.

Handwritten in white on mount below photograph: W N BLACKIE'
Handwritten on back of mount: 'W. L. THOMSON 31 ANGLEN I(?) ST. INVERCARGILL
2010.80
Laminated'