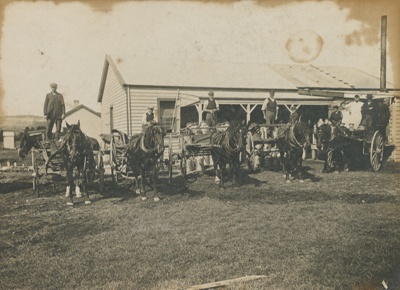 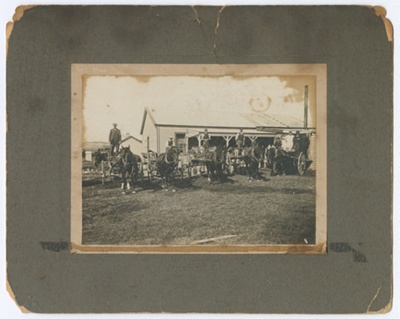 This is a photograph of the Otautau Co-operative Dairy Factory in 1912.

The factory began operations in 1906. Having easily filled the shares, secured a greater proportion of land they required and managing purchase a pre-used but modern factory and plant it at around only half the cost, it was an excellent beginning. To make things better the Government Dairy Inspector had designed their cheese curring room which gave them state-of-the-art processing capabilities with a capacity of 750 gallons and costing less than 600 pounds.

The attached Cheese Factory was operational for 70-years, peaking in the 1930s, to 372 tons. However, the following 30-years after this, dropped to the point that they output was only 139 tons. By 1977, the factory was amalgamated with the Edendale Factory.

The Factory was added to and extended on multiple occasions and some of these alterations still stand, minus the chimney which was demolished. The remaining building and site are part of what is now (2018) the DT King's Otautau yard, opposite the Otautau-Tuatapere Road turnoff to Merrivale.