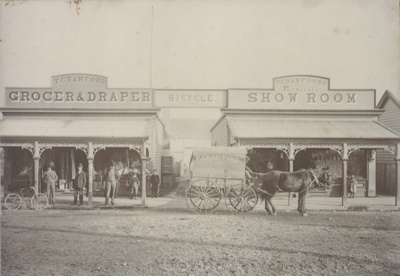 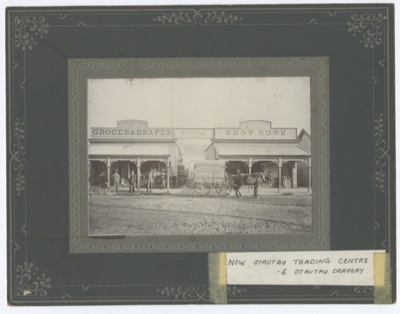 Francis' younger brother John originally owned the business which was burnt down in the 1901 fire. In 1902, John Crawford partnered with John Ravenscroft to expand his drapery and cycle business to include a Groceries and Ironmongery. When John's wife died suddenly, he shifted from Otautau to Gore leaving his shares to his older brother Francis who lived in Winton.

In 1905, at 46-years of age, John Ravenscroft killed himself on the roadside in Hodgkinson just out of Otautau. A note was found on John's body, stating that he was in ill health and could no longer carry on. After John's death, Francis took over the entire business and renamed it F Crawford.

At some point after 1912, Francis sells his very profitable business and fine home and shifted with his family to Christchurch, where he invested in Taxis.

Half of this original building still appears to be standing in the form of the recent 'My Cafe' business (2016), where Muriel Brown used to have her Drapers shop and the Otautau Trading Centre was. The other half of the building would have been where the new Central Garage Yard is now (2018) and this would have been pulled down before the 1932 fire, as the new Central Garage was already beside this other building then.

Francis' flash house, would have been on the building site now occupied by the new Central Garage.

On paper stuck to front of mount: NOW OTAUTAU TRADING CENTRE & OTAUTAU DRAPERY'
Handwritten on back of mount: 'O.D.H.S H/S 2010.71'