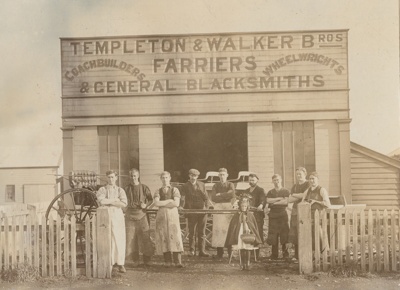 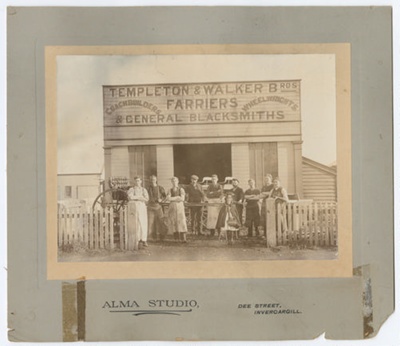 This is a photograph of Templeton & Walker Bros coach-builders, farriers, wheelwrights and general blacksmiths store. The company took over the premise in 1904, its previous owners being Afflecks. Afflecks stated at the time of the takeover, that with 'Davie' at the helm and Mr Walker a Bath & Co. trained first-class wheelwright from Invercargill, they believed their long and established business would be in good hands. Even earlier owners of this business had been the well-known Blacksmithing firm, Reid & Gray.

The above premises were located where the Otautau Super-value supermarket carpark now is and sustained damage in the 1932 Otautau fire which required a new building to replace it.

Who is in the Photograph?

Printed on bottom of mount: 'ALMA STUDIO DEE STREET INVERCARGILL'
Handwritten on back of mount: 'Otautau Main St Built when Reg Roffs butcher shop in now (1975) later a tea rooms - Laing Adventure in Otautau Old on May 7th 1907 as Successors to Affleck & Co'
'Given by J F Thomson Otautau O.D.H.S'