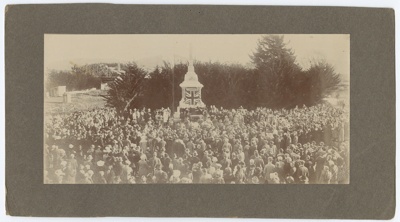 This is a photograph from the unveiling of the Otautau War Memorial in June 1922. Prime Minister Massey and Rev. Alex. Macdonald present on podium.

The idea of a War Memorial in Otautau was discussed almost to death, long before any move towards construction happened. As far back as 1918, the then Chairman of the Otautau Town Board, Mr Robert Seatter, advertised a public meeting in the new Town Hall, to discuss erecting a suitable memorial to the soldiers of the Otautau district, along with preparing the programme for the upcoming Peace Celebrations.

Again, in 1920, the new Chairman of the Board, now Mr Elisha Harrington, also called a public meeting at the Town Hall to address the necessary steps to erect the Memorial. The project was halted for years by what was thought of as often needless ongoing negotiation.

The War Memorial was built on land purchased from local business woman, Mrs Gardiner, with funds raised by the Progressive League. Mrs Gardiner had to be "persuaded" to part with her section for a fair price, as a favour for those who gave their lives in the war effort. Eventually a deal was done, but the land had cost the committee £100.

In mid 1920, after the Architect's Institute's design was rejected, a plan of Mr. AE Fraser's was accepted by the committee, at a cost of £925. A sub-committee was set up to see the work was carried out acceptably. This consisted of many well known local names, LM Thomson, E Harrington, R Seatter and JGC Baker. At that point, only 693 odd pounds had been voluntarily subscribed, with the committee being advised they would need to do a great deal more canvassing to get the needed funds.