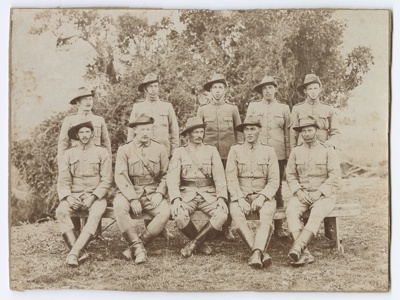 This is a photograph of the Wallace Volunteer Mounted Rifles in around 1917.

Who is the photograph?

We have identified the man seated second from the left in the front as being Quartermaster Ewen Matheson. Don McKay's 'The Troopers Tale' describes Ewen as being '6 feet 2 inches in his socks... (and) not a man to be trifled with, certainly not over issues surrounding his duties as a quartermaster for the Wallace Mounted Rifles.' Ewen ran a merchant store in Otautau which he based his operations as quartermaster out of and was known to work long into the night when preparing before the corps went to camp.