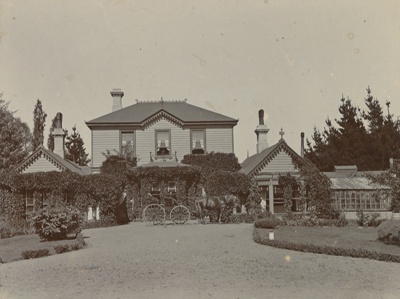 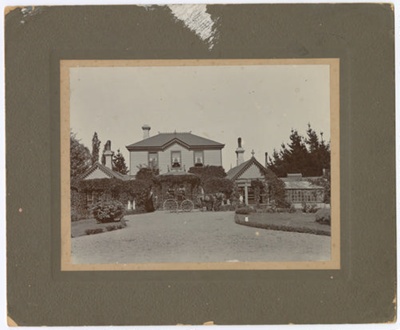 This is a photograph of the Birchwood Homestead.

The Birchwood Homestead was a two-storey house made of kahikatea. Built in the early 1860s, the house remained for over 100-years, but in the 1990s the house was demolished as it was full of borer.

Birchwood in the early days:

Named by the first run-holder on the land, Freeman Rayney Jackson, in 1863 the land was subdivided into 3 runs with run 143 retaining the Birchwood name.

Captain James Gardiner took up Birchwood in the late 1860s and from 1886 the estate became famous for the Birchwood Hunt and the associated house parties and activities on the property. Contemporary accounts paint vivd pictures of parties which had roughly 400 attendees and lasted for days. The hunt, a traditional English affair with horses and beagles, was also held at many other historical runs and stations across Southland. In time, the Birchwood hunt gained a rich reputation and has continued to be held annually for 132-years.

Nestled in and around the Twinlaw Rangers in the southeast and the Takitimu Mountains in the north, Birchwood Station covers over 1,800 ha. A modern sheep and cattle production unit, it annually produces 1,500 head of Hereford cattle and its 20,000 sheep shear 67,000 kg of wool.

Four generations of Edies have farmed the property since the 1920s.

On back of card hand written in blue pen: 'Return to John Muir King Street Otautau 4 cols x 4 Birchwood Homestead'
On back of mount in pencil '2010.22'

Kia ora Graeme. We acknowledge your interaction. As the Museum has to remain neutral on this matter, we have however removed your comment. We have left Jenna's up temporarily in hope that you will see it and it may be helpful. We hope this suffices and are very sorry for your experiences also. We have also disabled all public commenting from our account. Personally I can only relate from my own view of searching the archives on the old station estates, and knowing that many of them went bankrupt from rabbits, lack of money and lack of man-power during and after the wars, and in the depression years. Many were released back to the government also, as the owners could not afford to run them. It cannot have been easy for anyone involved at the time. Jenna, we would like to make contact with you in relation to your family history with this property, if you could possibly email us and apologize for any hurt that may have been afforded to the descendants of the family from this exchange. Collections Manager, email: collections.otautaumuseum@gmail.com

Hi Graeme, sorry to hear you had such a terrible experience on my family’s station. At the time you are talking of Eric (my Great Grandfather, who some say was a gentleman) was very lucky to have held onto Birchwood Station, farming was tough (still is) Birchwood owed more to the bank than what it was worth, I hear most people’s wages were cut in half due to post war depression. There is always two side as you’d agree. Hope life has been good to you since.
Many regards,
Jenna Brown