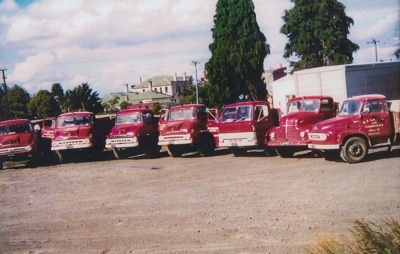 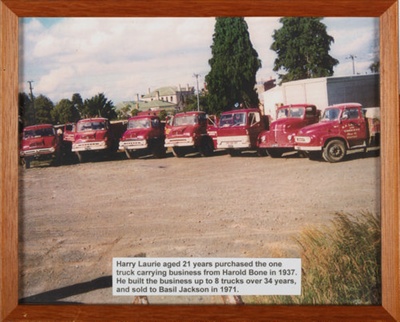 This photograph shows Harry Laurie's transport fleet at his yard sometime in the 1950s.

Harry purchased the business, and a single truck, in 1937 from Harold Bone; trading under the name H.F. Laurie Ltd. He built the business over 34 years, gradually adding trucks to his fleet to a total of eight, seven of which are shown here.

Harry was also a local inventor. Some of the older Otautau gents remember some of Harry's creations. One was an open-topped car that he put off-centre wheels on, using it to hump and lurch its way along the Main Street in the VJ Day parade, much to the amusement of onlookers.

Another more useful piece of engineered equipment, was Harry's bulk spreading gear, which consisted of a bulk bin with a removable "Munro" topdressing box under it, with another larger 4-axle bulk bin following that, which was able to hold 20-30 tonnes of fertiliser. Harry's trucks could continually refill the large bulk bin that kept the small bin going, without anyone having to stop work, it was truly wonderful!

Harry got his engineering/inventor skills from his father James Nelson Laurie, an engine driver and traction engine owner who started the first limeworks at Clifden in 1915.

Has a label printed into the bottom of the photograph which reads 'Harry Laurie aged 21 years purchased the one truck carrying business from Harold Bone in 1937. He built the business up to 8 trucks over 34 years, and sold to Basil Jackson in 1971.'
Collection number in pencil on back of frame '2009.10.1'

Thanks Bonny, great to have that extra information. Have added it to your father's file we have here at the Museum.

My father also made the first wheat bag loader in New Zealand which was later manutactured by Hamilton Engineering.